There’s a certain level of luck factored into baseball, both in fantasy and the actual games being played. Aside from injuries, perhaps the best way to see which players are “lucky” or “unlucky” is their batting average on balls in play, or, BABIP. Players will often regress to the mean towards a standard BABIP, though more skilled players with better batted-ball profiles routinely beat the league average.

The league has seen a decline in BABIP in recent years. The .292 league-wide mark in 2022 was the lowest since 1992’s .285 BABIP. With the shift being banned in 2023, a noticeable bump in average is likely and those benefits could be even bigger for some left-handed hitters. With all these signs point to significant changes in batting average, which players could be snagged at low cost before a potential breakout?

The season is not here yet, but why not get a head start and jump in a Fantrax Classic Draft contest? Get a jump on the season with a Best Ball league or maybe a Draft and Hold. Or put some green on the line with a new season-long league to try and conquer. There’s no better time than now to get your baseball on!

In five MLB seasons prior to 2022, Winker posted a solid .313 BABIP, but that number sunk to .251 with the Mariners. Even in a down year, he showed an impressive plate approach. The lefty slugger posted an elite walk rate while rarely whiffing or chasing. Winker has done this for most of his career, which is why the fantasy world seems to always be waiting on a bigger breakout from him.

On top of some expected BABIP-related rebound, Winker also has the benefit of a new ballpark. After a one-year at T-Mobile Park with the Mariners, he’s back in the NL Central with the Brewers for 2023. American Family Field has a 119 home run factor for lefties, tied for the fourth-best in baseball. In 32 career games in Milwaukee, Winker has slashed .344/.440/.591 with 12 extra-base hits. He should maintain a regular role as he did in 2022 when he saw a career-high 547 plate appearances.

Looking at his spray chart overlay on Milwaukee’s stadium, the potential benefit is clear. If Winker can tap into his hard-hit and barrel rates from 2021 he should surpass his career-high 24 home runs from that season. Finally, for those that believe in the “contract year” breakout, Winker is set to hit free agency after the 2023 campaign.

There may not be a more polarizing star in baseball than Buxton. He won’t be considered a traditional “buy low” name, but after missing the 400 plate appearance mark for the fifth straight season, some fantasy managers may be souring on the 29-year-old. Despite hitting .224 and missing 70 games, he clocked a career-high 28 homers with an .833 OPS, proving that the ceiling is as high as ever.

Buxton faced a shift in 78.8% of his plate appearances last season, the second-highest among right-handed batters. He registered a .312 wOBA against the shift compared to an outrageous .517 mark when he wasn’t shifted. Despite also dealing with some strikeout rate and whiff issues, Buxton boasts one of the most impressive batted-ball profiles in the majors. 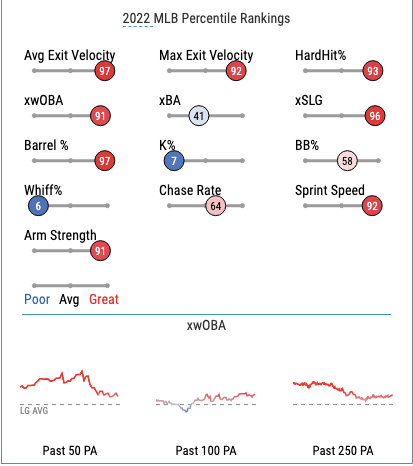 With the way he hits the ball, it seems almost unbelievable that Buxton could produce a .244 BABIP as he did in 2022. Based on everything we know about Stacast numbers and how they relate to real results, everything points to him being even better in 2023 and getting back near his career .305 BABIP. If he can stay on the field for the entire season, Buxton will be firmly in the AL MVP race while producing great fantasy results.

Among players with at least 350 plate appearances, Paredes’ .195 BABIP last season was the worst since Mark McGwire registered a .171 mark in 2001. In other words, he was the “unluckiest” player over the last two decades. Despite that, Paredes managed to pop 20 homers with a 114 OPS+, flashing real potential with the bat. Digging deeper into his profile, it’s easy to see a more impactful season on the way.

Paredes showed a great eye at the plate, finishing in the 88th percentile or better in walk, chase, and whiff rates. That approach and power combo should keep him in the lineup on a fairly regular basis, but his upside is limited by the Rays’ deep infield. He holds fantasy eligibility at each infield spot aside from shortstop which adds some flexibility. As things stand, Paredes is a nice option for AL-only or deep leagues but the low price tag on him entering his age-24 season could pay off.

While the injury history is a concern, it presents a buy-low window on someone that Diamondbacks manager Torey Lovullo called “the most talented player he’s ever managed.” Entering his age-29 season, Marte is expected to see more time as a DH. With no shift, he’d need to be more active in the field. However, he’ll see the benefits of it at the plate, especially from the left side.

From 2019-21, Marte slashed .318/.374/.543 with 138 extra-base hits across 279 games. A healthy 2023 should allow him to tap back into the power he flashed during that peak run. Add in an improving surrounding cast and the 29-year-old also has a solid floor for his runs and RBI totals. It’ll be important to check for updates on Marte’s health leading up to the regular season but he’s still worth the gamble at his current value.

Once considered one of the top catching prospects in baseball, Ruiz is now entering his age-24 campaign. A .271 BABIP led to a .251/.313/.360 slash line through 433 plate appearances in 2022, the worst line he’s posted in a full season at any level during his professional career. Ruiz boasted a plus hit tool throughout the minors and continues to show signs of it at the top level. He struck out in just 11.9% of his plate appearances and rarely whiffs. Ruiz’s profile is similar to Steven Kwan’s according to Statcast, which should inspire hope for his batting average potential.

Most projection systems have Ruiz reaching the double-digit home run mark after knocking just seven in 2022. His high pull rate and relatively low ground ball rate suggest that it’s possible. However, he finished in the 11th percentile in both hard hit and barrel rates. Ruiz could actually benefit from swinging less. 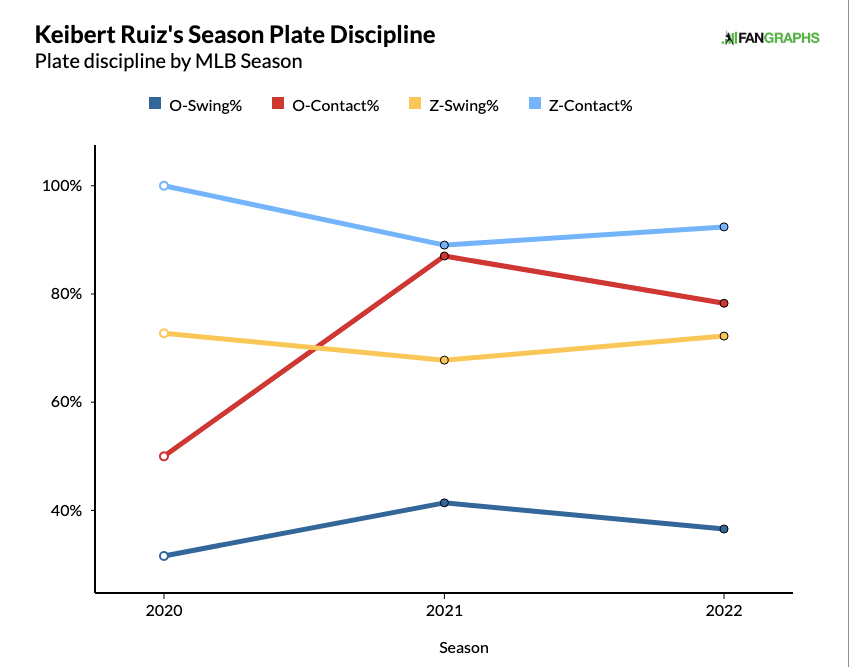 Because he boasts elite bat-to-ball skills and a low walk rate, Ruiz makes a lot of contact outside the strike zone, about 14% more than the MLB average. A better eye and more patience would show dramatic returns in his numbers this season. The Nationals’ lineup should be slightly better in 2023 and Ruiz is locked into the everyday catching role. He’ll provide a fairly safe floor, especially in two-catcher formats, but he could pop with top-10 value at his position.

The “Next Step” Guys

This group of players don’t have a buy-low window as they’re coming off strong 2022 campaigns or their name value carries too much weight. However, they could take another step in 2023 and provide great value compared to their current cost. Even the smallest discount on an elite bat like Juan Soto is worth taking advantage of.

No one knows how much the new rules in 2023 will affect batting average league-wide. At the very least the average BABIP should climb back near the .300 level. This offseason could be the last chance to buy low on some of these names before they pop in 2023.

Are you buying in on Tyler’s favorite bounce-back players? For more great analysis check out the 2023 FantraxHQ Fantasy Baseball Draft Kit!

Fantrax was one of the fastest-growing fantasy sites over the last few years, and we’re not stopping now. We are the most customizable, easy-to-use, and feature-rich platform in the industry, offering the greatest fantasy experience for your dynasty, keeper, redraft, and best ball leagues. Fantasy sports doesn’t sleep, and neither does Fantrax, with seasons running 365 days a year. Take your fantasy leagues to the next level now at Fantrax.com!