Brennan Othmann is among the 8 roster cuts announced on Friday for the New York Rangers.

Six players will be sent to Hartford Wolf Pack of the AHL, they are as follows:

Also announced was Adam Edstrom, who will return to Rogle BK of the Swedish Hockey League (SHL).

Othmann, 19, will be heading back to the Flint Firebirds of the OHL where he scored 50 goals and 97 points last season.

In his first exhibition game, he took a big hit on his second shift from Islanders defenseman Alexander Romanov that left him with a bloody nose. Instead of wilting or backing off, Othmann became more engaged and finished with two assists and earning first star honors.

“I felt pretty good, but you still get nervous and a little starstruck,” Othmann said after his preseason debut. “I spoke to [Schneider] and he told me you can’t really think about it, you just have to just play and the older guys like Kreider helped me with that.”

In his next game, Othmann didn’t fair as well but neither did the Rangers. He finished that game with a -1 rating, no shots, a penalty drawn and against.

His play still warranted a longer look, but the reality of his situation was always against the first round pick from 2021. Unfortunately for the Rangers and Othmann, he is too young to be sent to the Hartford Wolf Pack at the age of 19. That doesn’t give the Blueshirts any flexibility and why he was sent back to the OHL.

“I’m here to make an impression and to make the team,” Othmann told The Post before Thursday’s Garden exhibition against the Devils. “But it’s not the end of the world if I have to go back to junior.”

Per the Rangers press release, they have trimmed the roster at Training Camp to 34 players. The roster breakdown is listed below:

As far as camp battles go, the Rangers will need to cut at least 6-7 more forwards and 4 defensemen.

It should be noted that Tim Gettinger and Andy Welinski have been placed on waivers and will be sent to Hartford tomorrow once they clear. 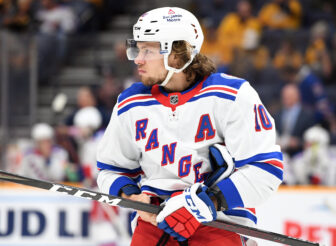