Each week The Athletic’s Jordan Bianchi answers readers’ questions about the latest happenings across motorsports.

Note: Some questions have been lightly edited for length and clarity.

Is there any truth to NASCAR pulling the Cup (Series) out of Elkhart Lake next year so they can race on a street course in Chicago? I hope not. — Richard L.

Is the potential Chicago street course a good or bad idea for NASCAR? Who deserves to lose their date for this to work? — Blake H.

Is taking the date from Road America to the supposed Chicago street course the right decision? I personally think the Road America date on July 4th weekend has the potential to be a new NASCAR tradition. — Dustin D.

The odds are increasingly that NASCAR will hold a race in downtown Chicago in 2023, as the Sports Business Journal reported Friday and The Athletic has since confirmed. Nothing is official and negotiations are ongoing, but the belief is this is something that will likely come to fruition.

Should it happen, NASCAR will then have fulfilled its desire to have at least one marquee addition to next year’s schedule with an event that clearly fits the “bold” and “innovative” vision NASCAR seeks with its schedule. Because make no mistake, while the race itself may not be the most entertaining — races on street courses rarely are — a race in downtown Chicago would be a very big deal, something NASCAR should consider a significant accomplishment.

Chicago and NASCAR finalizing a deal would almost surely mean Road America is coming off the 2023 schedule. With NASCAR not wanting to add a seventh road course, swapping out one road course for another is the only alternative. And because Circuit of The Americas, Sonoma and the Charlotte Roval are owned or leased by Speedway Motorsports and Indianapolis Motor Speedway by Roger Penske, NASCAR’s only real option is to shift a race from either Watkins Glen or Road America. And since Watkins Glen is owned by NASCAR whereas Road America is not, the answer is clear as to which track is expendable.

Road America getting dropped after just two years is an unfortunate development. Last year’s Cup race there — the first at the track since 1956 — was a success with an estimated 100,000 people attending across the weekend and an entertaining race. Add in the fact that a track synonymous with beer and brats is an idyllic venue to host a race on Fourth of July weekend, creating a sense this would be a tradition that took root on the NASCAR calendar.

The good news is that this move isn’t permanent. It remains to be seen what traction a race in downtown Chicago will have and if this is something that can have staying power once the novelty wears off. Street courses tend to come and go due to a combination of interest waning and the high costs associated with staging a race in a major downtown setting. And no one knows exactly how the Next Gen car will perform on a street circuit.

A conceivable scenario exists that Road America could return to the schedule in the not-so-distant future.


If NASCAR completes a deal to hold a Chicago street race, Wisconsin’s Road America race is likely to fall off the schedule in 2023. (Mike Dinovo / USA Today)

Any fresh gossip on that strange little Martin Truex Jr. retirement storyline that made the rounds earlier this month? If he were to call it quits, do you think Joe Gibbs Racing would bring Ty Gibbs up now, or do they have a stop-gap plan in the pipeline? Might as well ask too if the Kyle Busch contract situation affects this in any way, and even if it doesn’t, is JGR in a position to replace two talented drivers in one offseason? — Cole H.

Nothing new beyond what The Athletic reported a few weeks ago. Truex continues to mull retirement, and should he decide to step away, Ty Gibbs, the grandson of team owner Joe Gibbs, is on the short list of candidates to replace Truex. The only thing preventing Ty Gibbs from being the clear-cut choice is whether he could use another full season in the Xfinity Series to further develop. Opinions vary within JGR whether Gibbs is ready to race Cup full time.

What Truex ultimately decides is intertwined in the negotiations between JGR and Kyle Busch in that JGR does not want to lose two championship-contending drivers. Losing both creates a sizable hope JGR will struggle to adequately fill. Therefore, should Truex retire, re-signing Busch becomes even more paramount.

Regardless of what Truex decides, few actually expect Busch to leave the organization he’s been with since 2008. Really, the only thing that changes considerably is the leverage that the two-time Cup champion holds as he negotiates a contract extension.

Doubtful. Because while everyone with the exception of maybe Mercedes, Red Bull and Ferrari would like to see greater parity in Formula One, the reality is F1 has long been a series where a select few teams dominate each season. Measures like the spending cap were instituted to facilitate increased competitiveness throughout the field, yet big teams continue to have an inherent advantage. Either Red Bull or Ferrari has won every race this season.

The only hope is that the spending cap combined with the new regulations eventually creates a pathway where a mid-tier team using either engineering or economical ingenuity can consistently compete against the elites. It’s going to be some time before we know whether this is a possibility.

A compelling argument could be made that were F1 to find a way to have anything close to the level of competitiveness like you see in NASCAR and IndyCar, its popularity would only further grow. Greater parity would eliminate the biggest knock against F1 that the same drivers/teams dominate too much. People may then actually tune in because the racing itself is highly entertaining, not because they’re intrigued by what they watch on a reality television show. 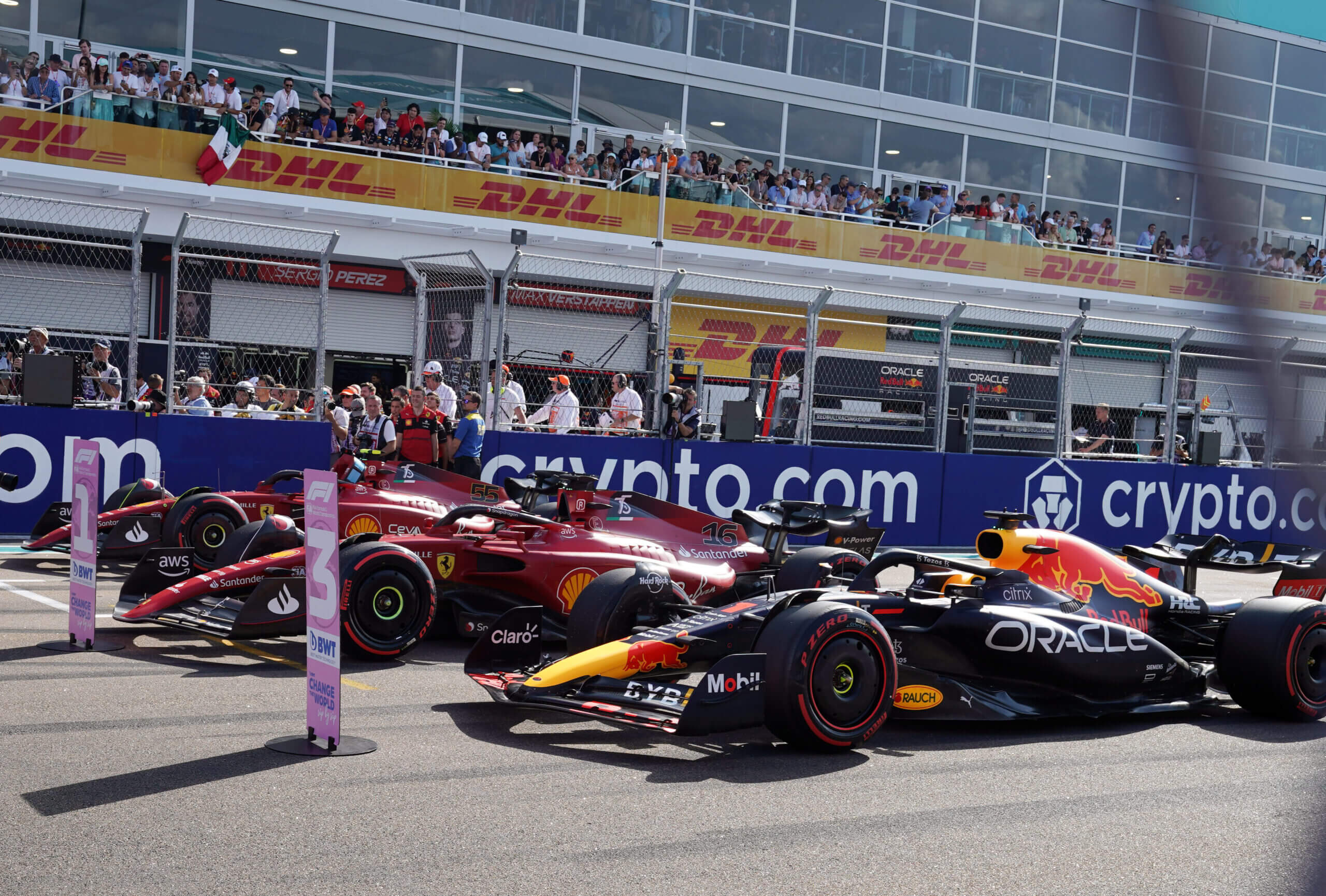 Red Bull and Ferrari cars have dominated the 2022 Formula One season so far — between them, they’ve had the winner of every race. (John David Mercer / USA Today)

Any updates on Michael Andretti getting approved as the new 11th F1 team? — Eric D.

Do you think Michael Andretti will succeed in getting into F1? — Bryan G.

Based on the comments numerous team principals have made recently, don’t expect Michael Andretti to be granted an expansion team anytime in the near future. Concerns exist that adding an 11th team would slice the economic pie too thin, and until this belief changes the support for his candidacy isn’t there.

“If a team comes in, how can you demonstrate that you’re bringing in more money than it’s actually costing?” Mercedes team principal and CEO Toto Wolff said. “If one is able to demonstrate that, then we should all be sitting on the table and cheer for such an entry. But that hasn’t been demonstrated yet. And that may sound a bit dry because it comes down to the numbers, but the value of Formula One is that it’s a limited amount of franchises. And we don’t want to dilute that value by just adding teams.”

Not every principal, however, is opposed to Andretti being granted a team. Both McLaren’s Zak Brown and BWT Alpine’s Otmar Szafnauer have spoken in favor of his candidacy, even signing the pseudo-petition Andretti carried around the paddock with him during the Miami Grand Prix weekend.

Andretti has adamantly stated many times that the addition of another American team on the grid would only bolster F1’s popularity in the United States, thereby negating any worries he’ll be taking money away from the already established teams. And he’s likely right that between the additional revenue an Andretti-owned team would bring in plus the exorbitant entry fee he’d pay — well into nine figures — it would offset teams having to split the pot 11 different ways.

But regardless of how much sense it may seem from the outside looking in, unless Andretti can somehow convince Wolff and Red Bull’s Christian Horner to change their minds, it doesn’t matter. Andretti’s only viable path to ownership is purchasing an existing team.

This is probably more of an offseason column, but interesting to me anyway. Let’s pretend we were doing a hypothetical race where each car number is represented by the best representative of that number. Who gets each number? Some are easy, like Jeff Gordon gets 24 and Richard Petty 43, but what do you do with 11? — Jeffrey C.

What a fun question, though one that is definitely best saved for the offseason when there is adequate time to tackle every car number. So let’s assess today who best represents No. 11 and save the rest for later.

This may surprise some folks, but the No. 11 — not No. 43 — is the winningest car number in Cup Series history. The notables who’ve won using this number include Cale Yarborough, Darrell Waltrip, Bill Elliott, Denny Hamlin, Mario Andretti, A.J. Foyt, Junior Johnson, Ned Jarrett, Bobby Allison and Buddy Baker. That’s a whole lot of heavy hitters, many of whom are in the NASCAR Hall of Fame — and in Denny Hamlin’s case, will be once he retires.

Even taking into account the different championship points formats, that Hamlin has yet to win a title is a blemish. This places him behind Yarborough and Waltrip.

Now we have a clear answer. The person most associated with No. 11 is not a driver, but a team owner in the same fashion that the Wood Brothers are forever linked to the No. 21. That person is Junior Johnson, who owned the team Yarborough and Waltrip drove for when they won their six combined championships and had 98 wins behind the wheel of the No. 11 car. And that Johnson also won 11 races as a driver using that number only further solidifies his claim.

Whether he eventually reaches the lofty heights set by Hamilton and Schumacher will depend on two primary factors. First, his longevity and if Verstappen, now in his eighth season, decides to race for as long as Hamilton and Schumacher, both of whom had careers spanning multiple decades. The second is if Verstappen can continue to drive for a dominant team — be it Red Bull or another outfit. Fernando Alonso is an example of an A-caliber driver who should still be winning races at age 40, yet hasn’t aligned himself with a team capable of giving him the cars to do so.

If Verstappen’s performance doesn’t subside, he stays healthy and with a team befitting his talent, the possibility exists he could one day push Hamilton for the all-time wins mark. He’s young and has developed into a driver who no longer lets his aggressiveness get the better of him. Instead, he’s calm and calculating, rarely making any critical mistakes.

Keep in mind, though, fortunes can change quickly in F1. There was a time not too long ago when Vettel was being discussed in the same manner as Verstappen is now. Then his rapidly ascending career tailed off. And it’s worth noting that as great as Verstappen is at the present, his career winning percentage (17 percent) currently is lower than Hamilton (34), Schumacher (29), Prost (25), Senna (25), Damon Hill (19) and Vettel (18).

So, in other words, let’s give it some time before we begin putting Verstappen’s career in context.

Boulter overcomes loss of grandmother to win at Wimbledon

Boulter overcomes loss of grandmother to win at Wimbledon