We skipped yesterday’s slate and I’m glad as it was just about the ugliest day of NBA I have seen in a while. So it’s a special Tuesday edition of my NBA Best Bets today as we have a much more palatable group of games going off tonight.

It’s a 9-game slate tonight and I like these big slates because we can be a little pickier and not have to force any plays. I went 1-2 last Friday to drop the overall season record dangerously close to the .500 mark, but we did hit a total (about time, right?) Let’s see where we can make some profit tonight and what the data says about these games.

It’s a long season and I would strongly encourage everyone to bet responsibly and sustainably so you don’t have to sit out at any point if your discretionary funds dry up. Definitely follow me on Twitter @ThunderDanDFS as I toss out some picks and player props to the public when I get a chance. In this article, I’ll be providing my favorite picks against the spread, game totals, parlays, teasers, and player props for NBA games on Wednesday, January 25th, 2022. I would highly encourage you to join our RotoBaller premium slack group by signing up for a premium pass!

Featured Promo: Get any of our Betting Premium Passes for for 50% off. Exclusive access to our our expert betting picks, exclusive Slack chatrooms, and powerful Betting Tools!

I am NOT including any picks I give out on Twitter on days that this article doesn’t run, just as an FYI. But I usually do put out my model on Tuesdays and Thursdays too. I also was advised by multiple people that I was being too hard on myself by counting teaser and parlay picks in my overall record, so I took those out and BAM, I’m sitting at six picks over .500 on the year right now, which is pretty solid.

I am not tracking units with these picks. If you’re wondering how many units to bet on each pick, just assume I’m betting one unit on each spread, total, or prop and likely only a half unit at most on each parlay or teaser. Here is today’s model, which now includes my personal spread calculation. I highlighted spots in yellow where my odds are significantly different from Vegas and a few of those are going to end up as official picks, while the others you can bet at your own leisure.

One thing you may notice is that I added an AVG +/- column and an ATS margin column. These columns track the season-long trends of the margin by which teams are covering (or not covering) the spread as well as the margin by which they have been going over or under their totals.

NBA Betting Picks Against the Spread

This is a really tough slate and there are very few spreads that I want to mess with tonight as my projections show very little difference from Vegas. I’m going to have to go with my gut here and it says that the Wolves be able to cover on the road in Portland. The rationale here is simple – Minnesota is a good young team that is trending in the right direction and if they’re able to get Pat Beverley back in the lineup tonight they’ll have a healthy (and dangerous) starting five back together for the first time in a while.

Minnesota is 3-1 over their last four games, with that one loss being on the road in Atlanta when they had a complete meltdown late in the third quarter (don’t worry – I remember it well as I had picked Minny that day). Portland is in solid form here, too, having won four of their last five and getting C.J. McCollum back was huge for them. Simons is filling in admirably for Damien Lillard and the Blazers are getting yeoman’s work from their wings with Little and Covington playing really well. Nurkic is a beast in the paint, but he will have his hands full with KAT, who is going to be a tough cover for him on the perimeter.

Minnesota is just a better all-around team and has the deeper bench, which I think tips the scales in their favor. If they can pull off a gritty win here on the road against Portland, I’ll become even more of a believer in their long-term prospects and the recent play of D’Angelo Russell and company makes me think they can get it.

So with very few spreads I like, I’ll be rolling with two O/U picks today. The first one is here in this Dallas-GSW game. Both teams come into this one playing some great defense as Golden State has allowed only 102 points per game over their last ten and Dallas has given up just 102.5. This game has the second-slowest projected pace on the board at only 96.4 possessions, too. Good defenses and slow tempo should equal not too many points.

While 212 points are the lowest total points on the board today, it’s not low enough. This game should be a low-scoring battle and while I think the Warriors come out on top, their recent struggles make me hesitate to pick them to cover despite the projections liking that pick. The safest pick is here is the under and I would take it all the way down to around 208-209 but I doubt it drops all that far during the day.

Now let’s get an OVER shall we? This game should be fun as we get a “solo Harden” taking on LeBron, Westbrook, and Anthony Davis in his first return to action in over six weeks. Perhaps the return of AD will help the Lakers’ defense a bit, but LA is still allowing over 212 points per game in their last ten and their biggest weakness all season has been defending the point guard position (so get Harden in your DFS lineups!)

Meanwhile, the Nets defense has been absolutely terrible of late as they’re allowing a league-high 117 points per game over their last ten games. Losing Kevin Durant has hurt and while Kyrie Irving has boosted the offense he doesn’t really defend at all. Kyrie won’t be playing today as the Nets are at home, but Brooklyn is going to have to patch together a team around Harden and LaMarcus Aldridge and they should struggle to stop the Lakers big three. I’d say the Lakers cover, but I rarely trust them and you just never know what kind of crazy game Harden can put up in these situations. We even saw him drop a big line on them earlier this year (36-10-10) in their first meeting.

So the safe bet is the over here, I have it projected around 229 and was excited to see it didn’t jump right away this morning. I would grab it soon, though, as I wouldn’t be surprised to see it jump a point or two by tip-off.

No teasers or parlays tonight, but feel free to build your own using my spread and totals projections! 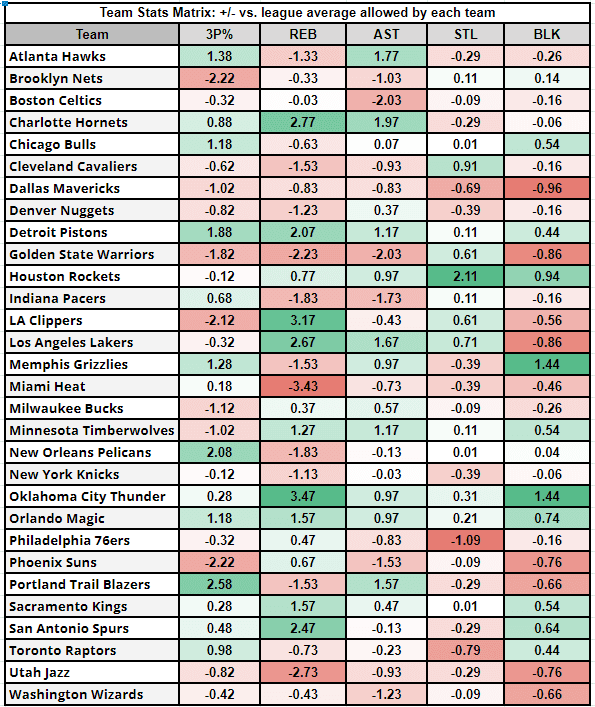 I use this chart when making player prop bets! I hope you find this information useful when making your bets as well.

Thanks for checking this new column out and check back every Monday, Wednesday, and Friday for the rest of the NBA season! Good luck and bet responsibly!