Week 3 in the NFL felt like the polar opposite of the week prior in fantasy scoring. In Week 2, the fantasy leaderboard was littered with big-time players posting highly productive weeks. In Week 3, we saw some unheralded names rise to the top of scoring leaders for the week. Whether it was players like Mack Hollins or Romeo Doubs taking advantage of increased usage or Jamaal Williams and Khalil Herbert taking over for injured starters, last week showed that it’s not always your studs in the lineup that will perform. This is the thin line that fantasy managers must navigate each week. Sure, there are the bonified starters that are matchup-proof that you never blink an eye over. In a lot of cases, those fringe lineup decisions are what separate you from wins and losses.

These fringe lineup decisions are becoming tougher by the week as we see injuries continue to pile up early into the fantasy season. The running back position has been hit the hardest with superstars like Dalvin Cook and D’Andre Swift looking like they could be missing time. While oft-injured Christian McCaffrey seems to be playing a game of chicken with the injury report each week. These situations that are arising are creating more doubt for fantasy managers when it comes time to set lineups. Do you play the risk-reward game and hope your stud sees a steady dose of usage, or do you give a backup player with a solid matchup the start? This is when doing the extra legwork in the analytical process comes in handy and separates the contenders from the pretenders.

Relieving the stress of those decisions is what I aim to do each week with this piece. I look for the diamonds in the rough in an attempt to give you an advantage over your competition. Simultaneously, bracing you for what could be disappointing weeks of production from your typical starters. I dive into the numbers to point out these players that I will be wooing and those that will be getting booed.

Featured Promo: Get a $25 deposit bonus AND a full-season NFL Premium Pass on the house by signing up for No House Advantage, exclusive home of peer-to-peer pick’em contests and up to 20X rewards vs. the house.
Sign Up Now!

The improvements to the weapons surrounding Jared Goff have helped propel his production from mediocre QB2 to a somewhat startable QB1 based on matchups to start the 2022 season.

His seven touchdowns (QB5) are a big reason behind Goff being QB11 in fantasy points per game (19.1). With D’Andre Swift a major question mark heading into Week 4, the offensive workload could be centered even more around Goff and the passing game. T

his could bode well as he will be looking at a semi-favorable matchup against a Seahawks defense that currently allows 17.8 FPPG to the position. With some of the more well-known QBs facing more stiff competition this week, it opens the door for fantasy managers to place Goff into the starting lineup. 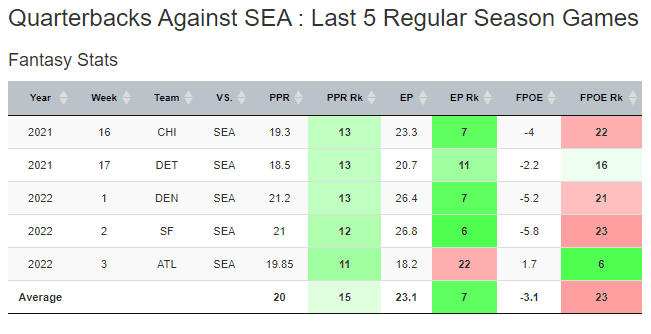 Staying with the game in Detroit, Week 4 could be the game where we see the Rashaad Penny that tore the NFL apart down the stretch in 2021. So far to start the 2022 season, he has been inefficient, to say the least. He currently sits inside the top 10 at the position in snap share (64.6%) but that has translated to just 6.0 FPPG (RB51).

The real surprise has been the change in offensive philosophy that we are seeing from the Seahawks so far as they sit at 31st in the league in run plays per game (18.7).

Look for that to change in Week 4 as the Seahawks will look to keep the Lions’ offense off the field facing a defense that is the worst in the league in fantasy points allowed to opposing running backs (27.5 FPPG). Fantasy managers should feel confident enough in Penny this week to plug him in as an RB2.

Brandon Aiyuk was not seeing the expected production to start the season with Trey Lance at QB for the 49ers. Since Jimmy Garoppolo has stepped into the starter’s role, Aiyuk has seen back-to-back games with eight targets, and he found the end zone for the first time this season in Week 3.

After seeing an 8% target share in Week 1, those numbers have increased to 33% and 29% in the last two weeks.

If those target numbers remain consistent, Aiyuk could be in store for a very productive game against a Rams secondary currently allowing 42.2 FPPG to the position. With Jalen Ramsey likely covering Deebo Samuel for a majority of the game, Aiyuk should reward fantasy managers as a WR3 with WR2 upside this week.

Slowly but surely, with the question marks surrounding the Packers’ receiving options, we are starting to see the return to form of Robert Tonyan.

Although he currently sits at just TE22 in FPPG (6.5), his usage stats have been encouraging with 11 receptions (TE9) on 14 targets (TE15). The fact that he has yet to find the end zone has been disappointing, to say the least.

Look for that to change in Week 4 as he faces a Patriots defense that has surrendered a touchdown to opposing tight ends in each of the last two games. Going against a defense that ranks near the bottom in FPPG (15.6) allowed should be good enough for fantasy managers to plug Tonyan in as a TE1 in Week 4.

Coming off the amazing first year in Los Angeles, Stafford has been off to a very sluggish start in 2022. The much talked about elbow injury in the preseason could be the cause for such mediocre play.

Factor in the poor pass protection from the offensive line and you can understand why he ranks outside the top 12 in both passing yards (761) and touchdowns (4).

I do not expect to see these numbers improve in Week 4 as he faces a tough test on the road against a 49ers defense that is one of the best in the league in points allowed to QBs (10.3 FPPG). Fantasy managers drafted Stafford to be their weekly QB1, but this week will be a game in which you should look elsewhere.

The much talked about Edwards Helaire has been a case of fantasy smoke and mirrors to start the 2022 season. He sits at RB4 with 17.7 FPPG but that can be very deceiving if you look deeper into the numbers.

His three touchdowns and 115 receiving yards have helped cover up the lack of separation in the running game as he has just seven evaded tackles. Edwards-Helaire also finds himself stuck in a timeshare as he has yet to exceed 44% snap share in any game this season.

So, expecting a correction to his numbers would be smart for fantasy managers. That correction could be coming this week as he faces a Buccaneers defense that is the best in the league in points allowed to opposing running backs (9.4 FPPG).

Fantasy managers will be wanting to continue riding the hot hand, but if you have another option on your roster in a better matchup, this is the week to plant Edwards-Helaire on the bench.

On the opposite side of a player off to a hot start, you will find D.J. Moore. Many expected the arrival of Baker Mayfield to be a positive for Moore, but it has been quite the opposite.

He sits at WR68 (7.9 FPPG) to begin the season on just seven receptions and one touchdown. He has been in on every passing route the Panthers have run, but that has translated to just 18 targets (WR42). The lack of usage has been concerning and something that may not change in Week 4.

Although the matchup on paper looks intriguing, the Cardinals’ secondary ranks in the middle of the pack in points allowed to the position (27.6 FPPG). Moore is far from trustworthy coming into this game and should be someone fantasy managers let sit on the bench until we see signs of life.

The tight end position, as always, has been extremely top-heavy with fantasy production. Logan Thomas’s numbers over the first two games were encouraging signs that he may be on the way back to being considered a low-end TE1 player, but in Week 3 he pulled the disappearing act with just five yards on two catches.

Even with the poor week, Thomas is considered a fringe TE1 with his 7.6 FPPG (TE15). Those numbers will likely take a hit yet again in Week 4 as he faces a Cowboys defense that only allows 4.7 FPPG to the position. At a position where many fantasy managers stream options each week, Thomas should be off the radar in this game.

Like what you see? Download our updated fantasy football app for iPhone and Android with 24×7 player news, injury alerts, rankings, starts/sits & more. All free!

Be sure to also check out all of our other daily fantasy football articles and analysis to help you set those winning lineups, including this new RotoBaller YouTube video: