After weeks of waiting patiently for new signings, while watching their closest rivals strengthen, Manchester United’s revolution under new manager Erik ten Hag appears to be clicking into gear. The club are close to completing a deal to sign full-back Tyrell Malacia from Feyenoord and, as revealed by The Athletic on Monday, Christian Eriksen has verbally agreed to join them too.

The 30-year-old is expected to move to Old Trafford on a three-year deal after his contract with Brentford expired last week. Thomas Frank’s side were desperate to keep him, but he has been swayed by the challenge of restoring United to the pinnacle of English football.

Assuming the deal is completed, it means that, 13 months after he suffered a cardiac arrest playing for Denmark against Finland at the European Championship and it seemed his career was over, Eriksen will be lining up for one of the biggest clubs in the world.

The midfielder made 11 top-flight appearances for Brentford after he joined them in January and had a huge impact. They won seven out of the 10 matches he started as they finished 13th and comfortably avoided relegation. Nobody disputed that Eriksen was Brentford’s star player, but the expectation, attention and pressure will be on a completely different scale at his new club. So what should we expect from him and how will he fit in at Old Trafford?

During his time working under Mauricio Pochettino at Tottenham Hotspur, Eriksen primarily occupied the central attacking midfield role in a 4-2-3-1 formation. It was his responsibility to drive the team forward and play line-breaking passes to locate Harry Kane in threatening positions. Looking at his final half-season at Spurs in 2019-20, you can see he fulfilled his remit in making his largest share of actions within that central attacking area of the pitch.

At Inter Milan, the Denmark international’s style of play developed as he operated across different areas of midfield — most notably playing a key role in a central midfield three within Antonio Conte’s 3-5-2 system that saw Inter lift the Scudetto in 2020-21. 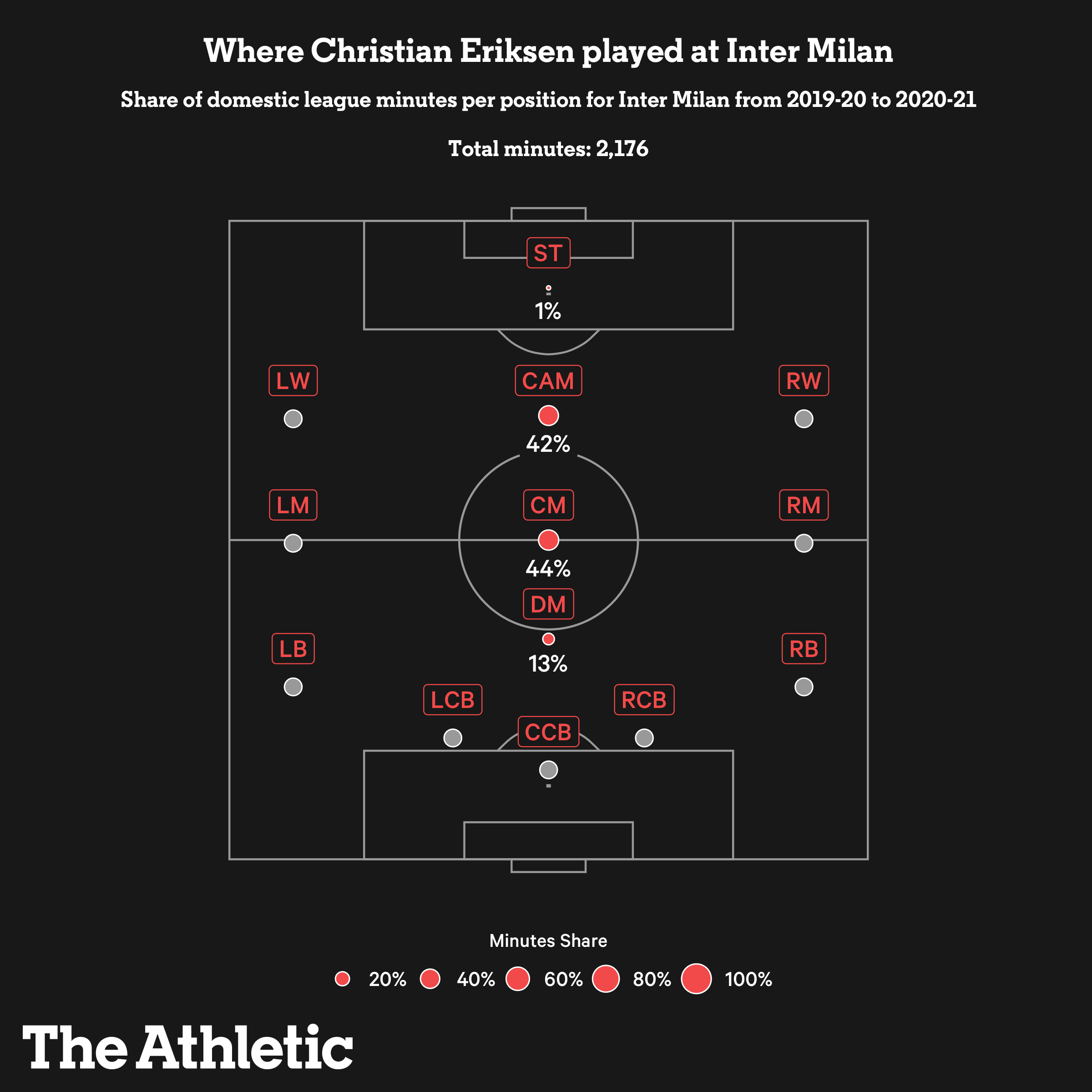 As The Athletic has previously reported, Eriksen’s role evolved further at Brentford, where he was more likely to drift towards the left side of the field and pick up the ball in his own half more often than he did earlier in his career. This allowed him to dictate play from deep and make diagonal passes across the pitch that stretched opposition defences. 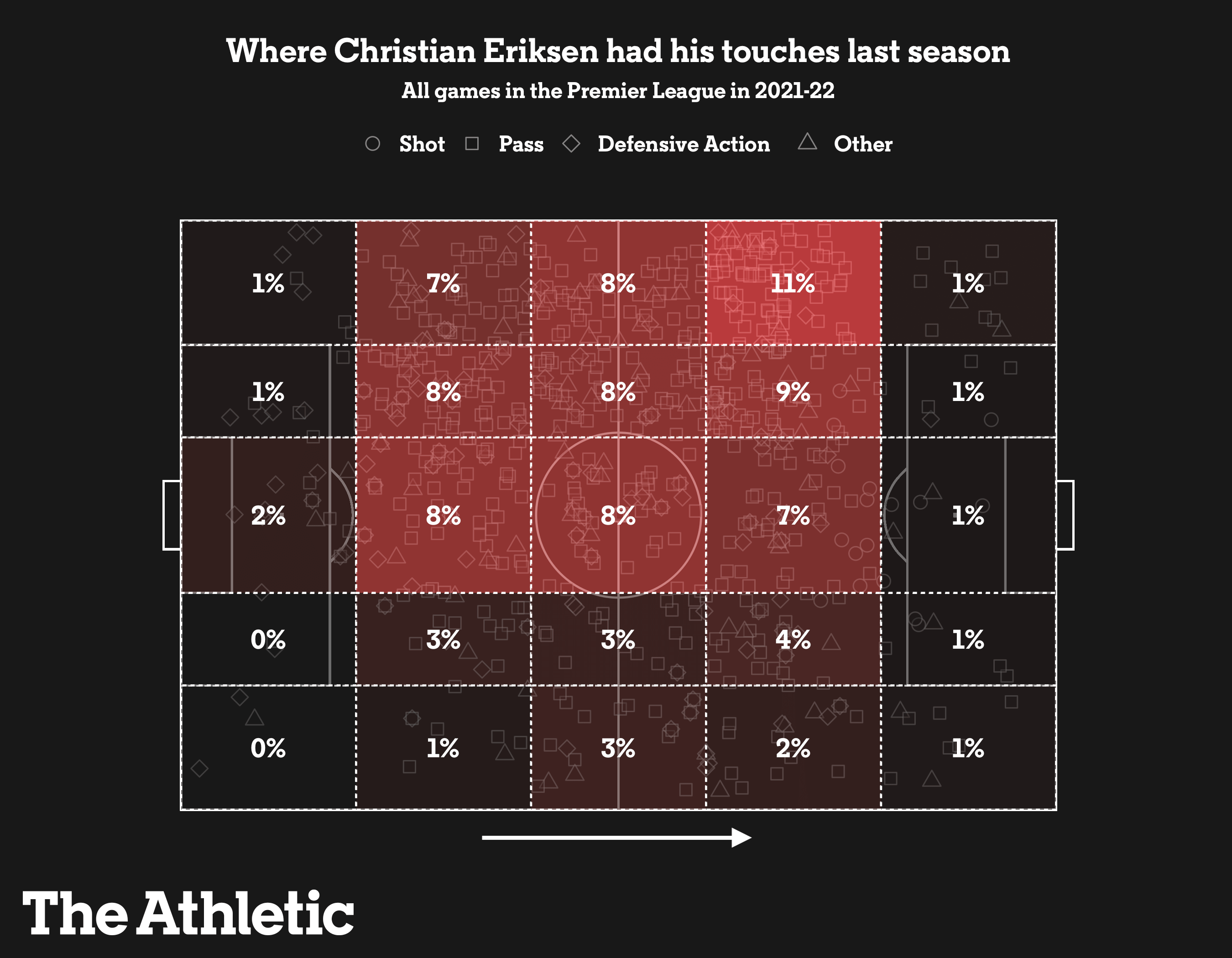 The 30-year-old’s debut for Brentford, in which came off the bench during a 2-0 defeat to Newcastle United in February, coincided with a switch in formation from 3-5-2 to 4-3-3 — Frank wanted to maximise his strengths.

Afforded protection by Christian Norgaard and Vitaly Janelt, Eriksen was given a huge degree of freedom to bend and manipulate games. No Brentford player averaged a higher volume of touches per 90 minutes than Eriksen’s 73.6 last season — put simply, everything went through him. He created the fourth-highest amount of chances (30) for Brentford last season despite playing in less than a third of their matches.

It is easy to imagine him performing a similar role at United. Officially speaking, Ten Hag preferred to use a starting formation of 4-2-3-1 at Ajax, with the destructive presence of Edson Alvarez alongside the graceful, progressive Ryan Gravenberch in a double pivot — with Steven Berghuis ahead of them in an attacking midfield role. 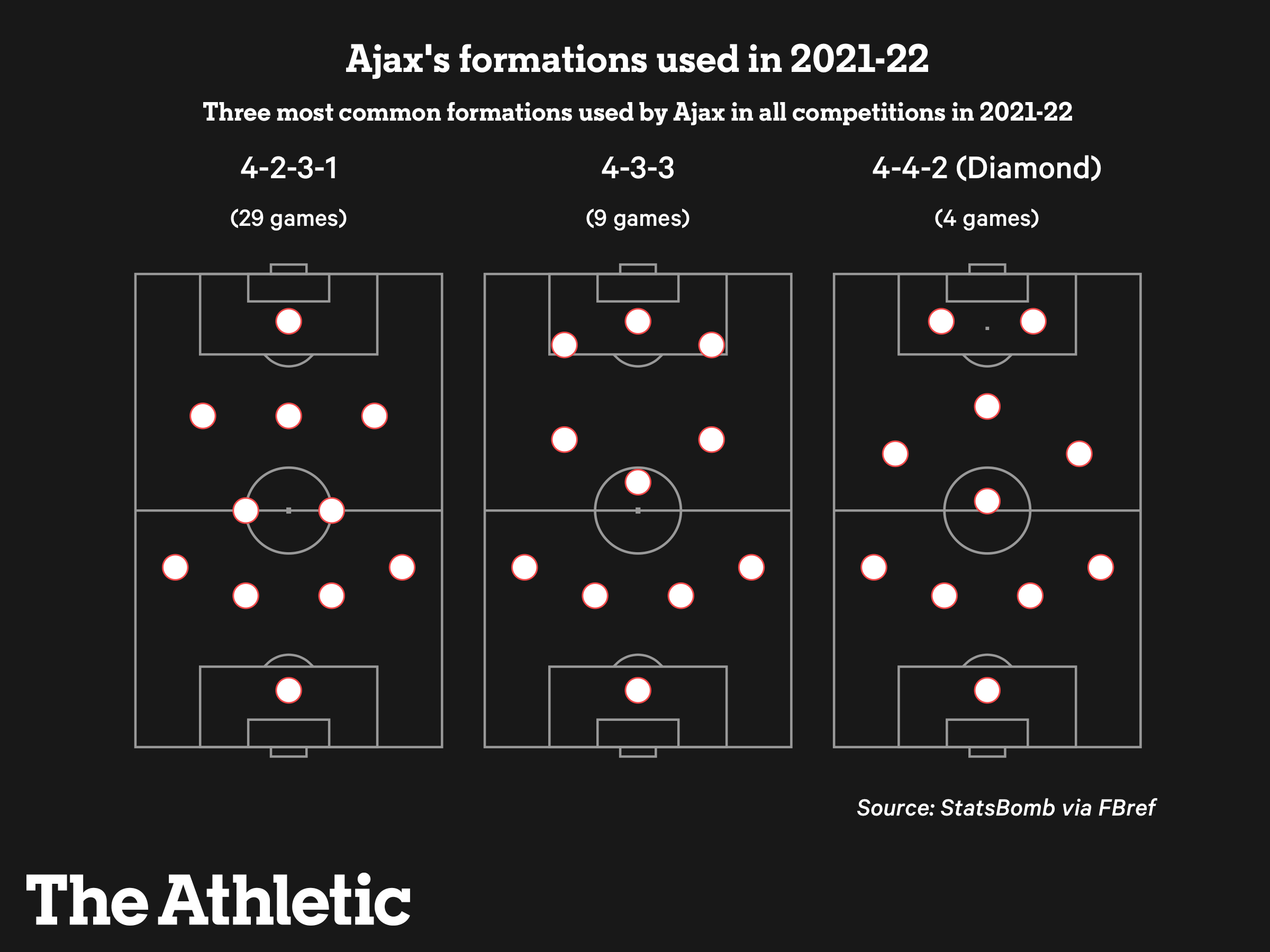 However, this starting formation is largely down to the interpretation, as the on-pitch reality often saw Gravenberch advancing further upfield in the left half-space with Alvarez retaining the majority of the defensive responsibilities — in a formation more akin to a 4-3-3.

Naturally, this leads to the question of how Eriksen’s arrival would impact the dynamic of Manchester United’s midfield. Pairing Eriksen with Bruno Fernandes is an exciting proposition, but would there be enough defensive discipline to prevent United getting overexposed in transition? Such an attacking approach could work against teams that sit back and defend, yet surely they would need to be more pragmatic against their top-six rivals — who often exploited the midfield consisting of Scott McTominay and Fred last season.

On paper, this chemistry between Eriksen and Fernandes appears to be a more natural fit than the Portugal international had with Paul Pogba. Pogba was guilty of being overindulgent in possession, whereas Eriksen has demonstrated his efficiency in moving the ball quickly and ensuring his team maintain a high tempo.

There are further variables to add into the equation. Frenkie de Jong has been United’s top transfer target throughout the window, yet he occupies similar positions to Eriksen on the left side of midfield. Meanwhile, United outcast Donny van de Beek would have reason to be optimistic about the arrival of his former manager Ten Hag, but further competition in his preferred position might be a further setback to his career at Old Trafford.

As The Athletic has previously outlined, United’s priority in midfield is a destructive defensive role which would allow more attack-minded players to flourish within Ten Hag’s system. The Dutch manager’s key task will be to find the perfect balance within that midfield area.

There is a lot of uncertainty around Cristiano Ronaldo’s future at Old Trafford. The 37-year-old has 12 months left on his contract, but has asked to leave the club due to his desire to compete for trophies. Ronaldo grew frustrated last year due to a lack of service, but that problem would be instantly solved by Eriksen and the pair would surely forge a devastating partnership.

United scored only 57 times last season, but Eriksen could be relied upon to consistently create quality goalscoring opportunities. He recorded four assists in total for Brentford, including a superb left-footed cross which Ivan Toney converted during their 2-0 win over Burnley in March.

It should not come as a surprise that Toney’s performances reached a new level following Eriksen’s arrival. He scored six goals in the first four matches they both started, while Yoane Wissa and Bryan Mbeumo blossomed too. Broken down further, Eriksen was creating chances worthy of an assist at a rate of better than one every three games. 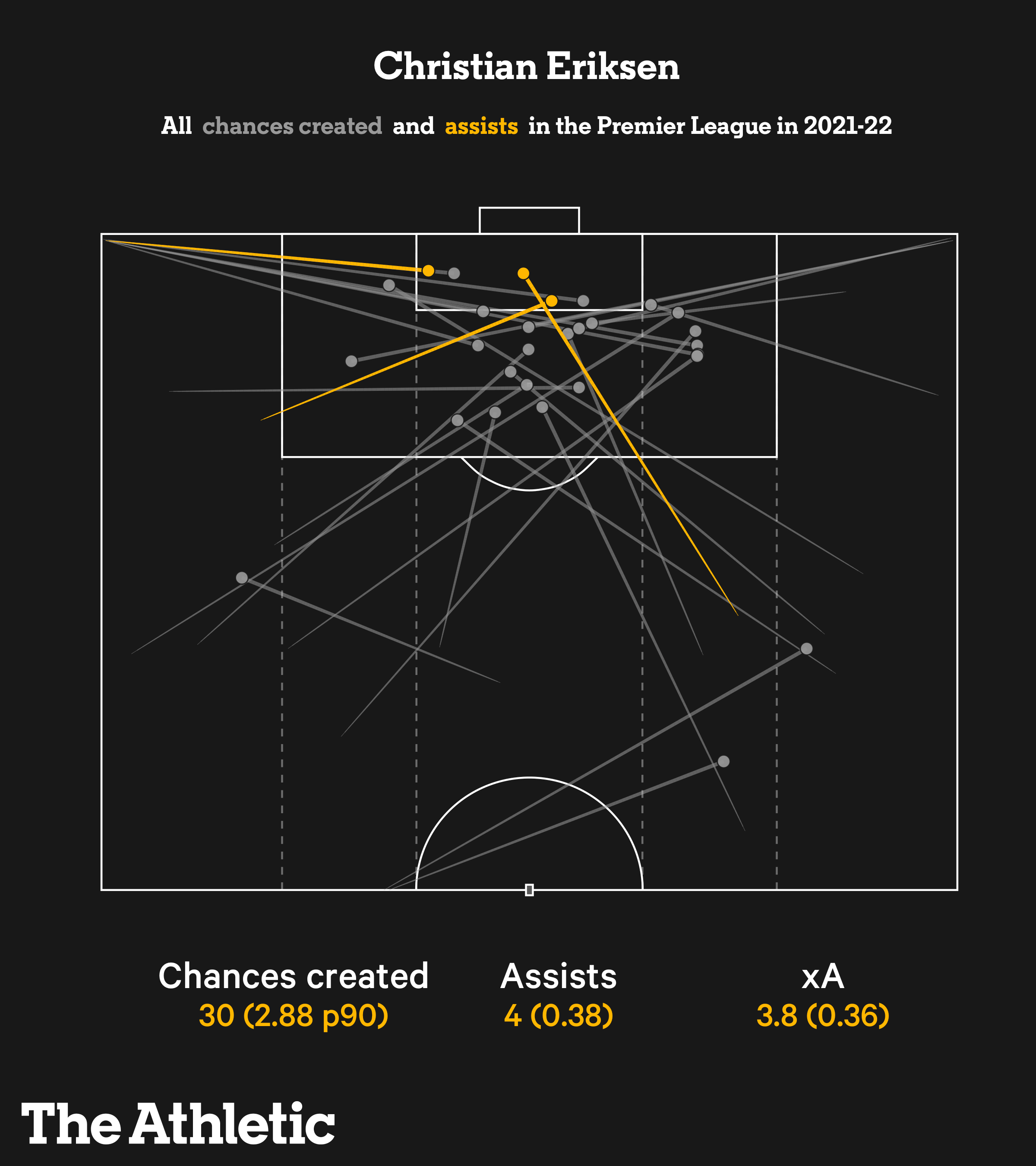 The midfielder’s eclectic passing range could become an even more potent weapon when it is combined with the speed and guile of Marcus Rashford, Jadon Sancho and Anthony Elanga.

Eriksen’s ability from dead-ball situations would be an immediate upgrade on United’s current options too.

When accounting for opportunity, United were among the sides with the lowest ratio of goals per set-piece taken — despite last season’s arrival of set-piece coach Eric Ramsay. An average of 36.4 set-pieces were taken per goal scored in 2021-22 — the joint-third highest tally in the Premier League. 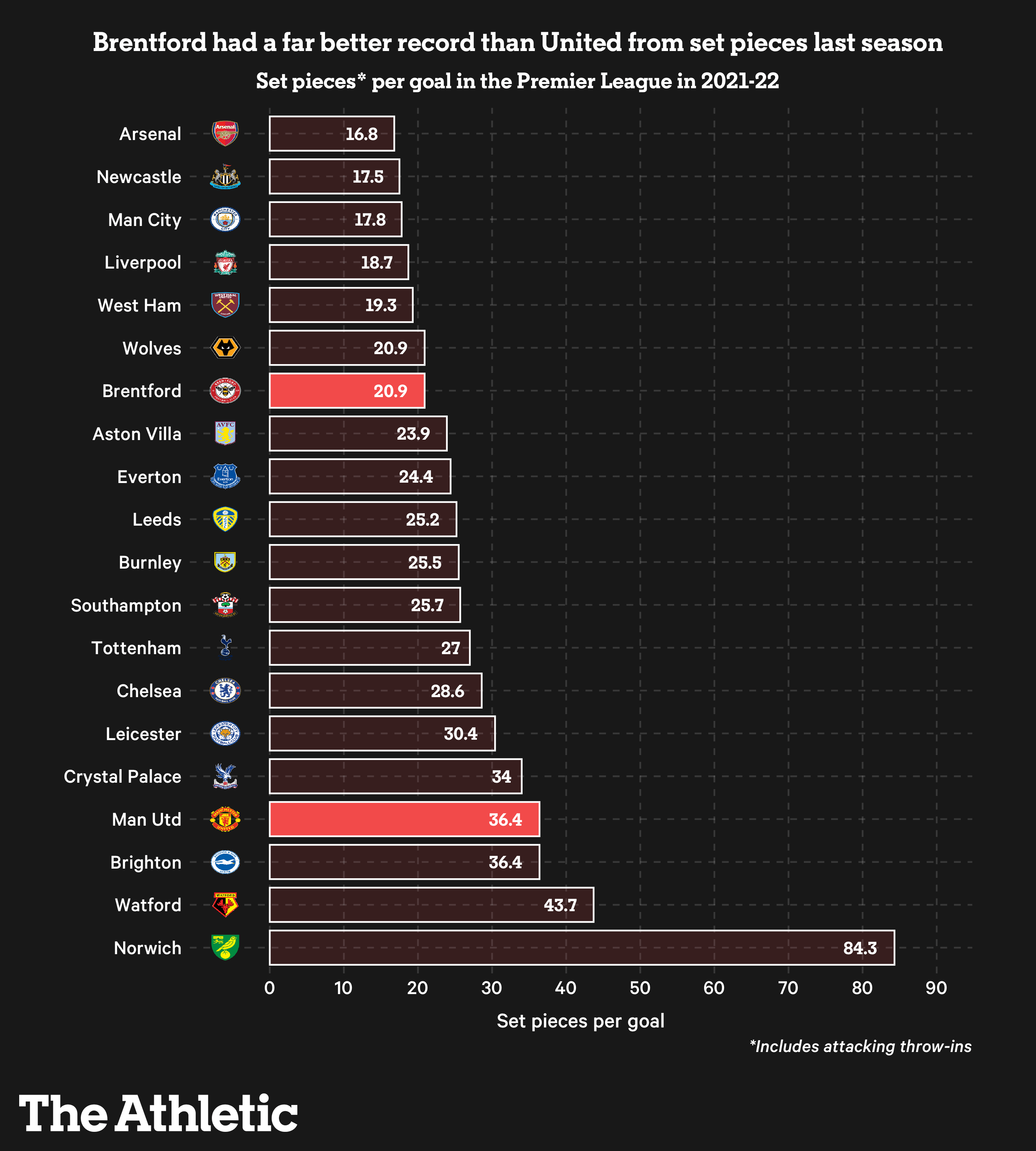 Brentford were far more threatening from corners and free kicks although that is partially down to their unique, creative routines including their threat from attacking throw-ins. It helped Eriksen end up with the best expected assists per 90 — ie, the expected goals value of the shot that is assisted — of any player in the Premier League last season from set pieces. 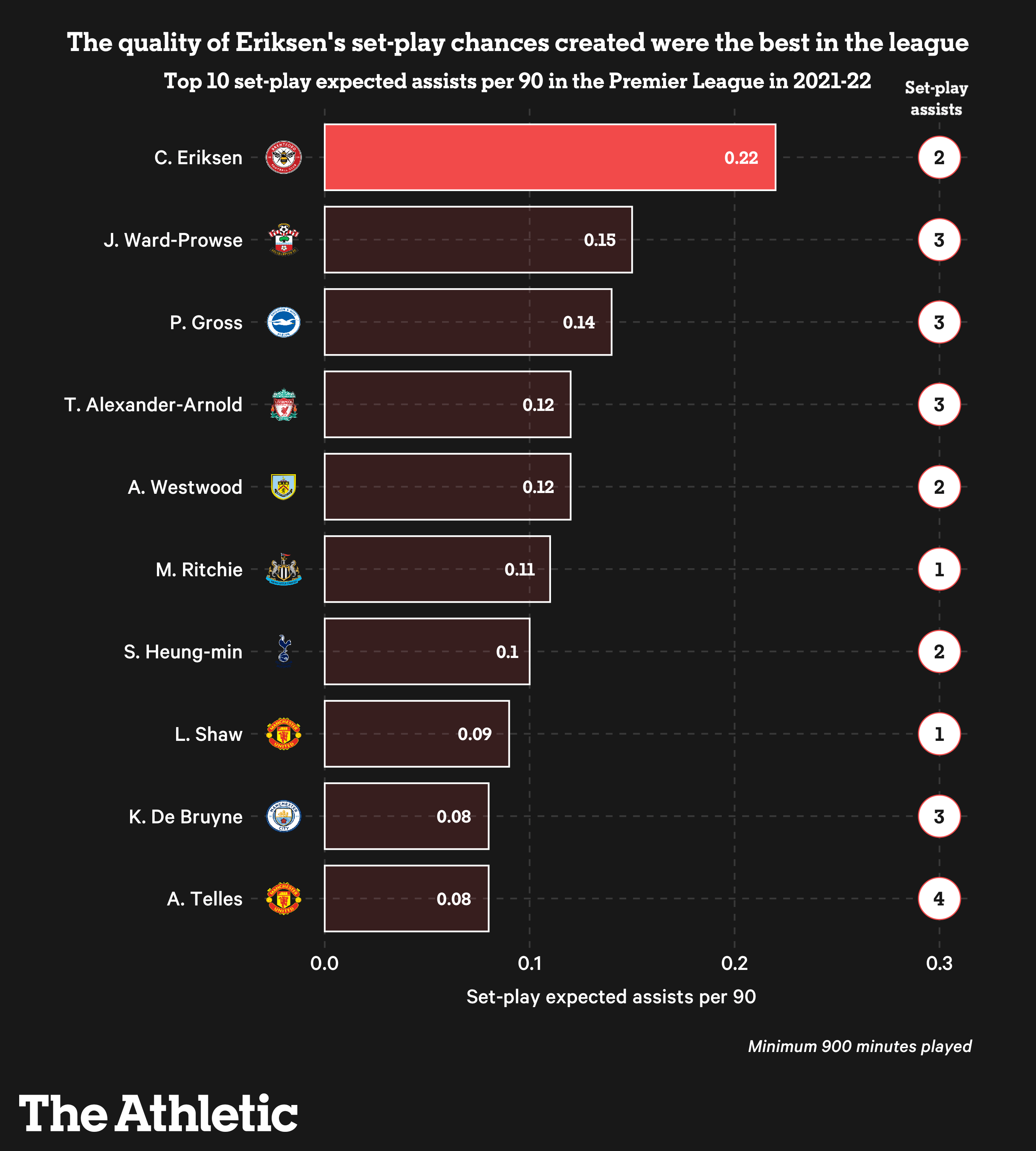 There are understandable doubts about whether United need Eriksen, but they are signing an experienced player who will clearly improve them in key areas and add depth to their squad. The 30-year-old could command a hefty wage, yet they do not need to pay a transfer fee because he is a free agent.

The club’s recruitment strategy over the past few years has been inconsistent and erratic, but in Malacia, Eriksen and De Jong, they are focusing on players who have been schooled within a Dutch way of playing — to combine with Ten Hag taking the reins.

Qatar 2022 opener will be like Cup final for Ecuador: Alfaro

Qatar 2022 opener will be like Cup final for Ecuador: Alfaro

Luke Getsy Did Some Showing Off In His Bears Debut